This month Mr. Karthik Sai takes us to the forests of South India to spot some common and some unusual bird species. 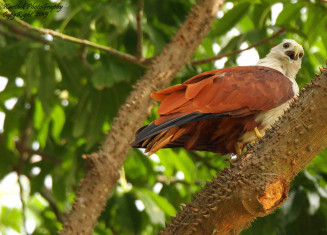 The Brahminy kite (Haliastur indus) also known as the red-backed sea-eagle in Australia, is a medium-sized bird of prey in the family Accipitridae, which also   includes many other diurnal raptors, such as eagles, buzzards, and harriers. They are found in the Indian subcontinent, Southeast Asia, and Australia. They are found mainly on the coast and in inland wetlands where they feed on dead fish and   other prey. Adults have a reddish brown plumage and a contrasting white head and breast which makes them easy to distinguish from other birds of prey. This kite is a familiar sight in the skies of Sri Lanka, Nepal, India, Pakistan, Bangladesh, and southeast Asia and as far south as New South Wales, Australia, through which region it is widespread and resident. They perform seasonal movements associated with rainfall in some parts of their range. They are mainly seen in the plains but can sometimes occur above 5000 feet in the Himalayas. It is evaluated as being of least concern on the IUCN Red List of Threatened Species. However the species is on the decline in some parts such as Java.

Jerdon’s bush lark (Mirafra affinis) is a lark of the open countryside found in southern India and Sri Lanka. This species was earlier considered a subspecies of the Bengal bush lark (M.assamica). However recent studies of differences in call and distribution have led to it being treated as a full species. It has proven adaptable to a variety of open habitats up to a maximum elevation of 1500 meters. Some of these are forest perimeters, rocky scrubland, scrubby hill meadows and clearings in open-type forests, shrub-edged unused croplands, and thickets of bamboo. Its song-flight is indistinguishable from that of Indian bush lark, However, unlike the aforementioned species, Jerdon’s bush lark often perches on trees and wires.

The Red-rumped Swallow (Cecropis daurica) is a small passerine bird in the swallow family. It breeds in open hilly country of temperate southern Europe and Asia from Portugal and Spain to Japan, India and tropical Africa. The Indian and African birds are resident, but European and other Asian birds are migratory. They winter in Africa or India and are vagrants to Christmas Island and northern Australia. Red-rumped swallows are somewhat similar in habits and appearance to the other aerial insectivores, such as the related swallows and the unrelated swifts (order Apodiformes). They have blue upperparts and dusky underparts. They resemble barn swallows, but are darker below and have pale or reddish rumps, face and neck collar. They lack a breast band, but have black undertails. They are fast fliers and they swoop on insects while airborne. They have broad but pointed wings. Red-rumped swallows build quarter-sphere nests with a tunnel entrance lined with mud collected in their beaks, and lay 3 to 6 eggs. They normally nest under cliff overhangs in their mountain homes, but will readily adapt to buildings and bridges. They do not normally form large breeding colonies, but are gregarious outside the breeding season. Many hundreds can be seen at a time on the plains of India. 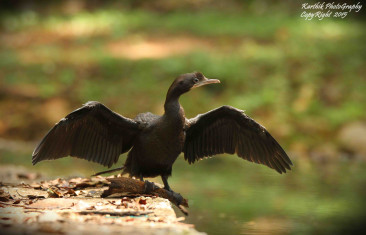 The little cormorant (Microcarbo niger) is a member of the cormorant family of seabirds. Slightly smaller than the Indian cormorant it lacks a peaked head and has a shorter beak. It is widely distributed across the Indian Subcontinent and extends east to Java, where it is sometimes called the Javanese cormorant. It forages singly or sometimes in loose groups in lowland freshwater bodies, including small ponds, large lakes, streams and sometimes coastal estuaries. Like other cormorants, it is often found perched on a waterside rock with its wings spread out after coming out of the water. The entire body is black in the breeding season but the plumage is brownish, and the throat has a small whitish patch in the non-breeding season. These birds breed gregariously in trees, often joining other waterbirds at heronries. The little cormorant is found across India, Sri Lanka, Bangladesh and lowland Nepal. It is also found in parts of Burma, Thailand, Laos, Indonesia. It is not found in the Himalayas, but vagrants have been seen in Ladakh. It inhabits wetlands, ranging from small village ponds to large lakes, and sometimes tidal estuaries. The little cormorant is about 50 centimetres (20 in) long and only slightly smaller than the Indian cormorant (Phalacrocorax fuscicollis).

The Asian koel (Eudynamys scolopaceus) is a member of the cuckoo order of birds, the Cuculiformes. It is found in South Asia, China, and Southeast Asia. It forms a superspecies with the closely related black-billed and Pacific koels which are sometimes treated as subspecies. The Asian koel is a brood parasite that   lays its eggs in the nests of crows and other hosts, who raise its young. They are unusual among the cuckoos in being largely frugivorous as adults. The name Koel is echoic in origin with several language variants. The bird is a widely used symbol in Indian poetry. The Asian Koel is a large, long-tailed, cuckoo measuring 39 to 46 cm (15 to 18 in) and weighing 190 to 327 g (6.7 to 11.5 oz). The male of the nominate race is glossy bluish-black, with a pale greenish grey bill, the iris is crimson, and it has grey legs and feet. The female of the nominate race is brownish on the crown and has rufous streaks on the head. The back, rump and wing coverts are dark brown with white and buff   spots. The underparts are whitish, but is heavily striped. The other subspecies differ in colouration and size. The upper plumage of young birds is more like that of  the male and they have a black beak. They are very vocal during the breeding season (March to August in South Asia), with a range of different calls. The familiar song of the male is a repeated “Koo – Ooo”. The female makes a shrill “kik-kik-kik” call. Calls vary across populations.

The Indian robin (Saxicoloides fulicatus) is a species of the family Muscicapidae. It is widespread in the Indian subcontinent, and ranges across Bangladesh, Bhutan, India, Nepal, Pakistan, and Sri Lanka. The males of northern populations have a brown back whose extent gradually reduces southwards with populations in the southern peninsula having an all black back. They are commonly found in open scrub areas and often seen running along the ground or perching on low thorny shrubs and rocks. Their long tails are held erect and their chestnut undertail covert and dark body make them easily distinguishable from the pied bushchat and the oriental magpie robin. This bird is found in open stony, grassy and scrub forest habitats. They are mainly found in dry habitats and are mostly absent from the thicker forest regions and high rainfall areas. All populations are resident and non-migratory. The species is often found close to human habitation and will frequently perch on rooftops. The species was introduced into the New York region but did not establish. A vagrant or escape has been noted from the Maldives. They feed mostly on insects but are known to take frogs and lizards especially when feeding the young at the nest. Individuals may forage late in the evening to capture insects attracted to lights.

The White-spotted Fantail or spot-breasted fantail (Rhipidura albogularis) is a small passerine bird. It is found in forest, scrub and cultivation in southern and central India. The adult white-spotted fantail is about 19 cm long. It has a dark fan-shaped tail, edged in white, and white supercilium and throat. Birds are mainly slate grey above, with a black eye mask, and a white throat and eyebrow. It has whitish underparts, and a grey breast band that is spotted white. The white-spotted fantail lays three eggs in a small cup nest in a tree. The white-spotted fantail is insectivorous, and often fans its tail as it moves through the undergrowth. Not normally renowned as a songster, the male uses a fixed and unmistakable pattern of musical notes in its call. The notes are loud and normally divided into two stanzas ñ the first with 5 to 6 trilling notes rising and falling, followed by 4 to 5 notes rising up the scale and ending in the highest note. Birds use the same song year after year, with progressively small changes, with the result that the song sounds very different after 4 to 5 years. The male’s call is a valuable tool in detection and identification of the bird. 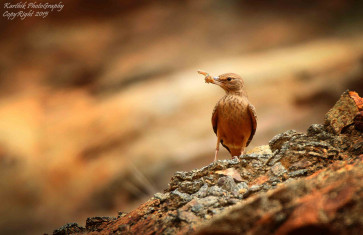 The Rufous-tailed Lark (Ammomanes phoenicura) also sometimes called the rufous-tailed finch-lark is a ground bird found in the drier open stony habitats of India and parts of Pakistan. Like other species in the genus it has a large finch-like bill with a slightly curved edge to the upper mandible. The dull brown colour matches the soil as it forages for grass seeds, grain and insects. Males and females are indistinguishable in the field but during the breeding season, the male has a courtship display that involves flying up steeply and then nose-diving and pulling up in a series of stepped wavy dips accompanied by calling. They forage on the ground in pairs or small groups. The species is found mainly in low altitude dry regions in open habitats without significant tree cover. It is a resident mainly within India south of the Ganges extending west to Kutch and the Aravallis of Rajasthan. They are summer visitors to parts of Pakistan in northern Punjab and in southern Nepal. The species does not occur in Sri Lanka and reports of their occurrence on the island of Rameshwaram are not confirmed while the species is largely absent along the Western Ghats region particularly in Kerala. Usually seen on the ground, but sometimes perching on wires these birds are not secretive. The walk on the ground making quick dashes to capture insects and when disturbed crouch and stay still to flush only when approached very close. The breeding season is from February to May. The display of males involves rising high with deep beats of the wing and then descending in a series of nose dives accompanied by short burbling or chirruping notes. They also call while perched. The nest is built in a depression in the ground and two to four eggs form the typical clutch. The eggs are broad oval with some gloss. The colour is creamy or pale yellowish-white with spots all over but denser at the broad end. The incubation period has not been ascertained.