The new evolving field of science is stem cells and in particularits promising applications in medical therapeutics, cosmetics, and drugs. Stem cells are finding good potential invarious fields of science and technology. The unique properties of stem cells is inducing keen interest of scientists all over the world and is driving them to utilize stem cell strategies to develop potential cure and treatments for various ailments, disorders and cancers. Over the past few years, research and development in stem cell technology has revolutionized the traditional methods of treatment and is emerging as an interesting field of study for the future. Many institutes and universities around the world provide various study programs for the younger generations to pursue. With this rate of progress, we can expect many life changing technologies in future that could leap miles of distance in the field of science. 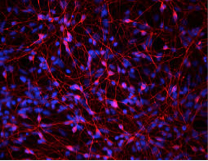 WHAT ARE STEM CELLS?

Stem cells are of different differentiation potencies and patterns as they traverse their biologically destined pathways. There are many types of stem cells forming organs based on their homing sites. In mammals, stem cells are found in embryonic stage as the inner cell mass of the blastocyst and these are known as embryonic stem cells (ESCs). In adults, stem cells can be isolated from brain, adipose (fat) tissue, skeletal muscles, bone marrow (pelvic region), heart, and liver. Stem cells are also isolated from umbilical cord of the new born (hematopoietic stem cells). Cord blood is rich in hematopoietic stem cells (HSCs) and the mesenchymal stem cells (MSCs) are extracted from the epithelium of the cord tissue. Each type of stem cellshas their own importance in a particular field. For example, HSCs are best used to treat blood related diseases likeleukaemia and lymphoma and MSCs are used to generate organs for organ transplants.

There are three main characteristics of stem cells and they are listed as below:

Identification: In a mixed population of cells, stem cells can be distinguished from other cells through certain specific markers called cluster of differentiation markers or commonly known as CD Markers.

Some research institutes design certain codes called as SLAM codes (Signalling Lymphocyte Activation Molecule) which belong to a family of cell surface molecules that are found tandem on a chromosome belonging to a subset of immunoglobulin gene super family.

As, mentioned earlier, there are many sites in the body of an organism from where the stem cells are obtained. They are classified based on their source as listed below:

Embryonic stem cells: These are obtained the inner cell mass of the blastocyst. 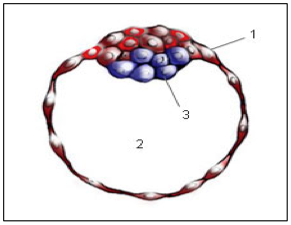 Figure 2: Blastocyst where 1 is the outer layer called Trophoblast; 2 is the fluid filled space called Blastocoel and; 3 is the inner cell mass. 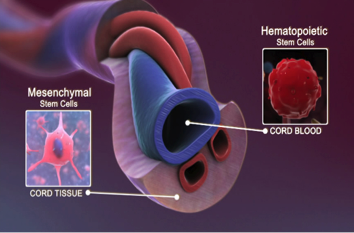 Figure 3: Two sources of stem cells from umbilical cord of the new born.

Adult stem cells: These stem cells have varied sites in the body like brain, skeletal muscle, adipose tissue, bone marrow (usually the pelvic region). The region chosen for the isolation depends on the case of the patient. 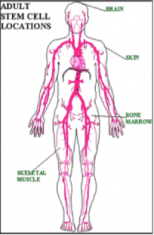 The different types of stem cells are as listed below:

Hematopoietic stem cells (HSCs) are the precursors to myeloid and lymphoid lineage of blood cells. These stem cells give rise to all kinds of blood cells and hence they find massive application in treating blood related disorders and cancers like Leukaemia and Lymphoma. HSCs have been in therapeutic use for more than 50 years. In the year 2006, 50,417 hematopoietic stem cell transplants were performed globally out of which 43% were allogeneic and 57% were autologous. The principal sources for HSCs are bone marrow (BM), umbilical cord stem cells (UCB), and mobilized peripheral blood stem cells (PBSC).

Mesenchymal stem cells (MSCs) were initially identified in 1976 as bone marrow stromal cells with the capability to form mesenchymal components such as fat, cartilage and bone. They are also obtained from the epithelium of the umbilical cord tissue. Along with the large regenerative potential of damaged mesenchymal tissues, MSCs are powerful immune modulators with promising results in the autoimmune diseases and GVHD.

Figure 6: Mesenchymal stem cells and the different types of cells that MSC gives rise to after differentiation.

Human embryonic stem cells (hESCs) are primitive precursor cells with an unlimited potential for self-renewal and the capability to differentiate into any cell type derived from all three germ cell layers. This pluripotent property makes hESCs powerful candidates for regenerative cellular therapies.

Figure 7: The inner cell mass of the blastocyst consists of hESCs and it is isolated for stem cell culture.

TYPES OF THE STEM CELLS FOR TRANSPLANT

There are three types of transplants that may be performed:

Autologous: a patient receives his or her own stem cells. So there is less risk of rejection or graft-versus-host disease GVHD.

Allogeneic: a patient receives stem cells from someone else- either a relative or an unrelated donor.

Syngeneic: a patient receives stem cells from an identical twin.

The method of extracting the stem cells from a specified site and processing it for the preservation is termed as harvesting. The method of harvesting most commonly used in clinical practice is closed technique which is similar to the standard blood collection techniques. There are three locations for isolation of stem cells in the human body: umbilical cord of the new born, peripheral blood and bone marrow (pelvic) region. The harvesting protocol depends on the site of isolation of stem cells.

If the site of isolation is umbilical cord then the technician cannulises the vein of severed umbilical cord using a needle that is connected to a blood bag and the cord blood flows through the needle into the bag. On average closed technique enables collection of about 75 collected cord bloods. 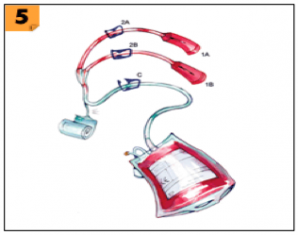 If the site of isolation is bone marrow then the protocol followed is different. Stem cells are 10-100 times more concentrated in bone marrow than in peripheral blood. The (pelvic) bone contains the largest amount of active marrow in the body and large numbers of stem cells. Extraction from bone marrow is considered painful and whole procedure is carried out under anaesthetic condition. Several small punctures are made in skin over the pelvic bone and a special needle attached to a syringe is inserted through these punctures into the bone marrow. The doctor draws the marrow and blood out of the bone marrow until enough stem cells are collected for the transplant. The whole process is carried for about 2 hours. About 500-1000ml of bone marrow is removed for the treatment purpose. Puncture sites are covered with bandages or a pressure dressing and the patient is prescribed few medicines to relieve pain from the sore developed in hip area. 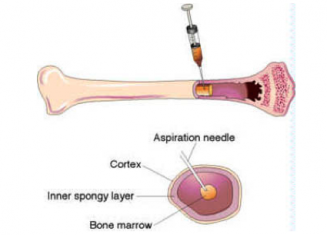 If the site of isolation is peripheral blood then the protocol is much simple and easier. It is called as Aphaeresis. In the preceding week before aphaeresis is performed the donor receives drugs to increase the number of stem cells in his or her bloodstream. During Aphaeresis, the donor’s blood is removed from usually through the arm and it flows through a machine that isolates the stem cells. The blood then flows back to the donor while the extracted stem cells are frozen untilthey are transferred to the recipient. The entire process lasts for about 5 hours.

Sometimes, a simple blood collection process is carried out using a syringe and the sample is sent to clinics for the further processing. The amount of blood extracted depends on the requirement of the patient. 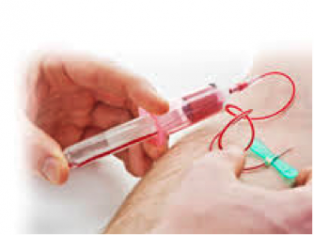 Figure 10: Extracting the peripheral blood from the patient.

After harvesting the stem cells they are stored through a process called Cryopreservation. Cryopreservation is a process where cells,or whole tissues are preserved by cooling to sub-zero temperatures. The cells are stored at -196°C in Liquid Nitrogen cans. This way the cells can be stored for long durations ranging from few months to many years. DMSO (Dimethyl Sulfoxide) is used as a cryoprotectant, added to the cell media to reduce ice formation and thereby prevent cell death during the freezing process. Approximately 10% is used with a slow-freeze method, and the cells are frozen at -80°C or stored in liquid nitrogen containers. 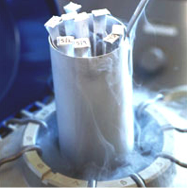 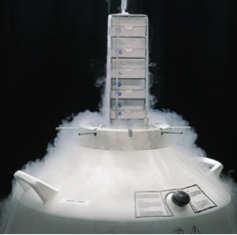 The research and development in science has given new outcomes to the world such as induced Pluripotent Stem Cells (iPSCs). These are adult somatic cells that are genetically reprogrammed to an embryonic stem cell-like state by being forced to express genes by introducing certain transcription factors. These genes are important for maintaining the defining properties of embryonic stem cells. iPSCs were first reported in 2006 by Shinya Yamanaka of the university of Kyoto, Japan, who was awarded nobel prize in 2012 in Physiology or Medicine for his discovery. He shared his prize with John B.Gurdon of Gurdon institute in Cambridge, UK, who is known as “godfather of cloning”. Later human

iPSCs were reported in 2007. iPSCs are useful tools for drug development, modelling of diseases and scientists hope to use them for transplantation medicine. Currently viruses are used to reprogram but this has to be controlled effectively because the viruses introduced into the animal for reprogramming the cells might cause cancers. But, recent studies involve non-viral delivery strategies. Tissues derived from iPSCs will be a nearly identical match to the cell donor so this avoids the rejection by the immune system. This new technique will also pave way for the researchers to learn how to reprogram cells to repair damaged tissues in the human body. 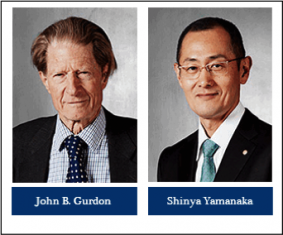 Figure 13: Scientists who won Nobel Prize for their discovery in the field of stem cells technology.

Figure 14: Image shows the formation of an induced pluripotent stem cell cell(iPSC) colony after 12 days of reprogramming of mouse embryonic fibroblasts (MEFs). The cells are stained with antibodies for histone H3 acetylated on lysine 27 (H3K27ac, red), and the pluripotent marker Nanog (green); DNA is stained with DAPI (blue). The cells in the background are MEFs that have not been reprogrammed.

DiponEdBiointelligence LLP is a Bangalore based company that works as a technology support provider, with a focus on developing intelligent solutions- services and products to serve no-option medical conditions and unmet healthcare needs, through a personalised approach. At DiponEd, we offer study programs and conduct workshops for students aspiring to learn new biological, cellular therapies, POC stem cell transplantation and processing. Contact info@diponed.com for more details.