This month we visit Weikfield’s Button mushroom farm located near the city of Pune to know more about its cultivation process on commercial scale. 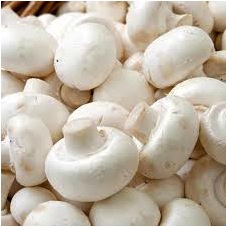 Fruiting bodies of these fungi are termed mushrooms. They are white in color and the shape resembles a button, hence they are called button mushrooms.

They contain antioxidants too.

Being saprophytic in nature, the mushroom mycelium cannot synthesize its own food .It requires a selective nutrient rich substrate from which it can derive and utilize water and nutrients for its growth. 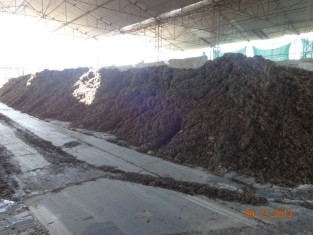 Mushroom compost is made from cereal wastes like wheat straw, paddy straw and poultry waste. These wastes are otherwise burned or land filled and may be an environmental challenge.

Formulation is prepared based on nitrogen and carbon contents of the substrates. Dry straw ingredients are thoroughly mixed before initiation of composting process .Composting is initiated by adding water to the straw. 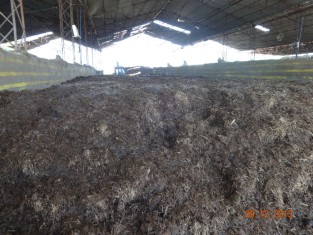 The process of water addition is called prewetting. The wet straw is mixed with the poultry waste .Then this mass,now called compost, is flipped and piled. Ample water is added to the compost to maintain the required moisture for composting .Microbial activity starts in the presence of the water, nutrients and oxygen.

Then this compost is filled in the chambers provided with forced draft aeration system. Ambient air is supplied to compost to keep aerobic conditions .Under aerobic conditions microbes degrade the complex substances.A lignocellulose mass is produced.Due to microbial activity, ammonification starts .This is an exothermic reaction and generates a lot of heat. Then this compost is placed in another chamber that has air recirculation systems .Here the compost is first pasteurized at 60 deg cel and then conditioned at 48 deg cel. During this stage actinomycetes synthesize proteins which are further utilized by mushroom mycelium.

After this compost is cooled to 25 deg cel. 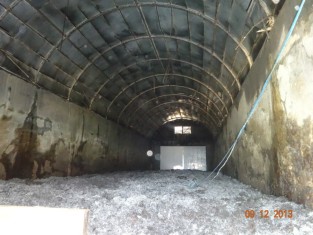 To this compost, spawn is added .Spawn is mycelia of mushrooms grown on millet /wheat grains under sterile conditions in a separate place called as spawn lab. Spawn acts as seeds of mushrooms and are in the form of thread like structures called as mycelia.

Spawn mixed compost is filled in bags and is transported to cultivation houses called growing rooms . Growing rooms are insulated structures with climate control system and provision of air handling with supply of chilled water.

Racks are fabricated in the growing rooms to accommodate the spawn mixed compost bags. Racks are multilayered to use aerial space for cultivation.

In this stage, the compost temperature is maintained at 25 deg cel with high humidity and carbon di oxide levels. It takes 15 days to complete spawn run.

At the end of this stage, bags turn white with complete colonization of mushroom mycelium which is white in color.

Then these bags undergo the next process of cultivation called Case Run.

On 15th day of spawn run bags are opened and on the surface of the compost a layer of specially prepared material called casing soil is applied. Casing soil is prepared by mixing river clay with coco peat, which is a byproduct of the coir industry .The main function of casing soil is retention of water and provision of physical support to mushroom fruit bodies.

The casing soil is steam pasteurized to kill any probable pathogens of mushrooms. During case run, mycelium from compost grows into casing layer and comes to its top. This process takes 5 to7 days.

During this stage casing layer is watered to maintain high moisture.

Once the mycelium reaches surface of the casing layer, the next process of cultivation-Flushing, is initiated. During this stage, the climate in the room is altered to change vegetative stage to fruiting stage. This is done to induce fruiting of mushrooms.Air temperature is dropped, followed by compost to 20 deg cel. Carbon dioxide is dropped to 1000ppm.

When the pins attain pea size ample watering is done on the surface. 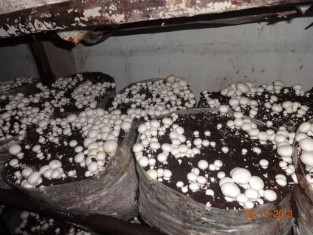 This helps in maintaining moist conditions in the casing layer. Mushrooms absorb nutrients from compost and water from casing layer and compost.

When the fruiting bodies attain a diameter of 35mm, they are harvested as mushrooms. During harvesting, a cool climate is maintained with low carbon dioxide level (18 deg cel temperature and 1000 ppm carbon dioxide)

The mushrooms are handpicked by giving a twist.The bottom portion called root is cut and discarded. The remaining portion which consists of a round top portion called cap fand the cylindrical longer portion called stem constitutes a mushroom which is then ready for consumption. 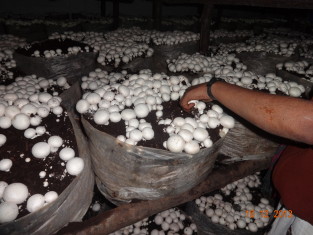 The handpicked mushrooms are placed is specially designed containers of Food grade pannets of plastic and poly bags.

Then these harvested mushrooms are transported to packing section where they are weighed and packed by closing adhesive strips.

Batch number and date of packing is printed on the packs so that consumers understand its age.

Mushrooms are perishable and have a limited shelf life of 5 days.

They need to be stored refrigerated at temperatures from 2 to 8 deg cel.

Shelf life of mushrooms can be enhanced by canning it.Canning involves blanching, brine filing and retorting.

2 thoughts on “A visit to Weikfield’s Mushroom farm”