Iron has been used in India since 1200 BC or maybe even earlier.With time new ways of extraction and use have been developed.Even today,processes continue to evolve in our quest for perfection.

This paper describes a significant breakthrough in the process of removal of Silica, in a commercial setting, through a modified Froth washing in flotation and HGMS magnets technology.

This methodology has proven useful for iron ore Pellet making plants. The results of this study show a significant improvement in the resultant product that positively impacts. Cost factors and profitability and Benchmarking parameters for exports.

Cost of metal production increases if the Contaminants are high in concentrates. In general the major contaminant is Silica in the form of SiO2. The quality of metal produced, depends on contaminants in raw ore. Metal making industries refuse to accept low grade concentrates having undesirable contaminants, as feed to smelters. The concentrate exported should be of good quality with less Silica. If they exceed the limits, heavy penalties are imposed. The export prices varies with % of Silica present. Prices are high if Si% is less. For Iron ore pellet making concentrate should have Si% <1. In Zinc concentrate ISM should be < 3%.

STEEL: Consumables increase in Blast furnace for making Steel if the contaminants are high. The major contaminants are Silica and Alumina. Coal consumption and Lime addition increases proportionately with % SiO2 and Al2O3 present in feed to Blast Furnace. Cost of metal making increases due to this. Handling cost becomes high. Pollution of Air increases, due to more fuel addition. Useful for iron ore Pellet making plants.

ZINC: In imperial smelting process (ISM) play a major role for costing and quality of Zinc metal. If Silica in concentrate is >6 % concentrate is not accepted.

This paper describes Innovative commercial operation/ methods of Silica removal through Froth washing in flotation and HGMS magnetic separation. It was proved through continuous operation for years and still in operation today.

Zinc metal is produced from mineral Spalerite, through Pyro metallurgy and Hydrometallurgy Technology. Pyro-metallurgy is economical at low silica concentrates received from Process plants. Silica > 3% is not economical. Cost of production increases with more silica contamination.

Blast furnace : Consumption of Coke, coal, & fluxes increases with the increase in Silica contamination in ore fed to BF.

Heavy penalty is imposed if we exceed the SiO2% limits in NIT Specifications given while making sale order.

Today industries adopt conventional flotation process to to get concentrates suitable to down line metal making process. In general conventional cells adopt Tank cells with bubble sizes from 25mm to 100mm. Tank cell shape may be round or rectangular. All have agitators to mix air and slurry to create and distribute Air bubbles in slurry. Conventional flow sheet has Rougher, Scavenger, and Cleaner cells. Few have Regrind Ball mills. Normal Particle size for Flotation is 75 micron. If interlocking is high grind size may be as low as 45 micron. In Air bubble flotation it is observed that middling having High Silica is trapped in-between bubbles and is reported in concentrates produced. Several methods were tried to reduce SiO2

But silica contamination could not be reduced. On investigation and doing several R&D tests both in lab conditions and in pilot plant, it was observed that froth washing 100%, can reduce Silica contamination. This paper describes in detail several steps adopted to achieve the target.

Flotation cells produce bubbles having size range from 25mm to 100 mm, with a froth depth from 100 to 150mm. Bubbles travel at very high velocity during the process and come out of cells as concentrates. ( Similar to milk overflowing during heating) Mechanical entrapment of silica is high at bigger bubble sizes ( see Fig-1). Smaller bubbles give less inter space and less contamination, but not 100% efficient ( see fig 2) . Wash water spray at high pressure through holes in a pipe,  cause bubble breakage, and give very low yield. All bubbles do not get washed. In lab tests, it was observed that small bubbles do not get broken on spraying water on bubbles. . It was observed that production of small bubbles in conventional cells is difficult. An attempt was made using perforated pipes for spraying water on bubbles. . It was successful. Later several attempts gave to new innovation called Column flotation, with Bubbles less than 2mm, even micro bubbles are produced. To produce small bubbles AIR Spargers having high technology of injecting , air in a column of slurry is used. 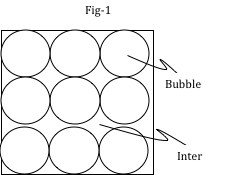 As diameter of bubbles increases bubble inter space also increases, and breakage of big bubbles is high with wash water. 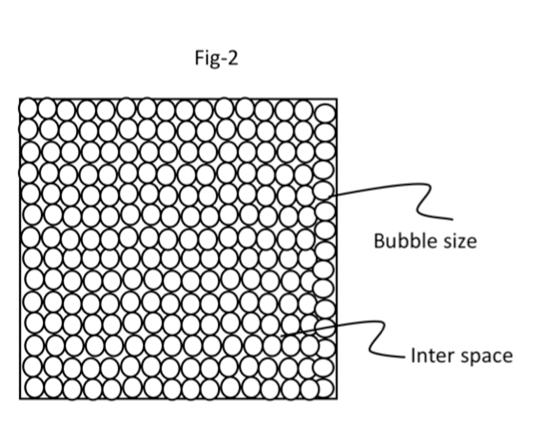 As diameter of bubbles decreases inter spaces between bubbles are less and breakage of bubbles is low with wash water. Even when water pressure is high bubbles remained stable.

In the year 1910-1916 Column Flotation was invented, and put in to commercial application from 1980 (Molybdenum cleaning ). Toady all over the world this technology is adopted at large for different minerals at commercial scale to improve quality of concentrates and improve yield. Column flotation is used for different minerals like, Zn, Pb, Cu, Gr.C, Coal, Iron, Phosphate, Flour spar, Lime stone, Sillimenite etc. Conventional froth washing system did not give encouraging results in reducing Silica contamination in Concentrates. Due to High Quality of concentrate Specifications for Zinc concentrate to be used in Imperial Smelting in HZL, led to innovation of new technology of froth washing. This paper describes about such technology of washing interspaces between BUBBLES.

Water is sprayed through holes in circular pipe as shown in FIG-3. Water is pumped to pipe at high pressure, As seen in Fig 3 we see that water is falling in froth bed at high velocity in the form of spray only at two points in a circle. This system was used in Zinc washing but silica reduction could not be achieved as per Specifications given by Imperial Smelter..

Further system was improved to RIB  type spray as in Fig 4. 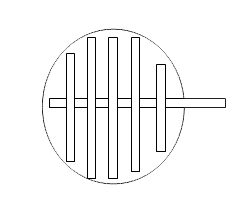 After modifying spray system as per Fig 4 testing was done. But little improvement was seen . Further system was modified  FIG- 5, with the combination of fig 4 and fig 3

Testing was done with  new system. Results were encouraging. R&D with Poly Propylene punched plates of sizes 1, 2, 3 mm were tested below spray system .  3mm plate gave good results.  System was improved using lesser diameter  pipe   of PVC  with spray above PP plate,  directing to sky,  like water fountain. This gave 100% good results and proved to reduce silica from 8% to 3%. This system was operated for few months in commercial column. Zinc concentrate thus produced was accepted by Imperial Smelting process. 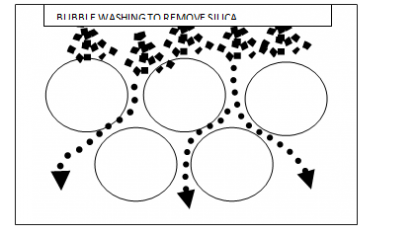 There is uniform distribution of water spray all around froth bed. Each bubble of 1mm size is washed 100%.  Water pressure is broken by spraying water like a fountain and gently fall on punched plated below. Spray water is equally distributed in DROPLETS  on punched plate. Water droplets from punched plate slowly TRICKLE  on  EACH BUBBLE . Thus interspaces are cleaned at a forth depth of 500 to 1000mm continuously carrying all Middling down below froth bed. Thus MIDDLINGS are separated from froth bed and clean concentrate overflows column cell.  . This system proved to reduce silica by washing inter spaces without breaking bubbles.

Tests were don on commercial scale in a column. Air Spargers used to inject and produce 1mm bubbles in slurry.  Column  is totally operated in remote using PLC and DIDC.  Metallurgical results of all above tests are given in table below. Table 5.1 and 5.2 It is proved that SILICA can be reduced by washing forth in column flotation cells using INNOVATIVE technology. This may be adopted for all minerals. For iron ore it is called as reverse flotation. Float Silica and depress Iron.

CONTINUOUSLY OPERATED IN THE YEAR  1999. TEST RESULTS  ARE AS UNDER

Improvements made by adding Regrind ball mill and operated commercially. Column tail  reground in RGBM  and  recirculation  in Rougher Cells. Commercial plant Test results for the year 2001-2003 are as under.

Increase in recovery observed with reduction of ISM. Marginal improvement in Zn%.

2.1 Introduction:
Huge waste is generated during dry screening and washing ores. All waste dumps have reached peak points and cause pollution and environmental problems. R&D proved to INNOVATIVE TECHNOLOGY to process all   fines from ponds, dams, and dumps.

2.2 CONVENTIONAL PROCESS:
Direct flotation using fines proved  to fail in achieving  grade and yield, for the reason that slimes hinder the process of flotation. Since clean concentrates form magnets contain less slimes and found useful for flotation even at concentrate grades of 55% to achieve  65%Fe with 3% Si for all ores having Free Si and Fe.

2.3 FLOW SHEET:
150 micron from a classifier is de slimed in cyclone. Cyclone under flow is processed in a magnets of 7000 and 10000 gauss. Magnet concentrate is de slimed  in cyclone to get clean concentrate.