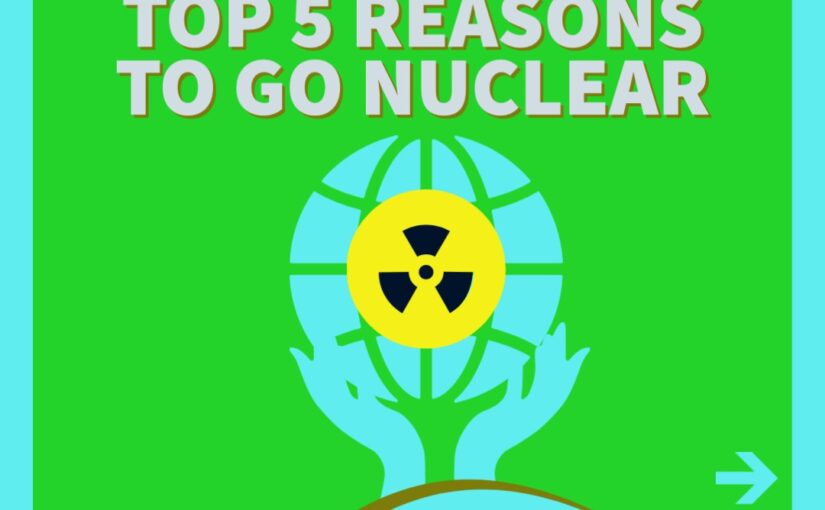 Nuclear Energy – The Fuel of Tomorrow

As concerns on Global warming and depletion of Non-Renewable sources of energy mount, the quest for safe, renewable and abundant alternative source of energy has gathered momentum.

A front-runner in this energy race is Nuclear Power. Countries such as Slovakia, France, Ukraine, Hungary and Bulgaria already produce over 40% of electricity through nuclear power plants. With the available reserves, it is projected that energy needs for the entire world can be covered for hundreds of years through nuclear energy.

Here are the top five reasons to switch to Nuclear power.

A clear goal of the ‘Paris Agreement’ is to limit the rise in Global temperatures to under 2 Degrees Celsius. Greenhouse gases are significant contributors to Global Warming.

Over the course of its life-cycle, nuclear power is equivalent to wind energy in terms of CO2 equivalent emissions per unit of electricity and one-third compared to solar energy.

The production of nuclear power is more reliable, consistent and more predictable than renewable sources such as Wind and Solar power which are subject to climatic variation. In some studies it has also proven to be more reliable than Hydroelectric and other power plants.

Capacity factor is a measure of what percentage of the time a power plant actually produces energy.

Contrary to popular belief, Nuclear power production is safer as it generates less amount of waste than other thermal electricity generation technologies. Safe and effective methods are available to dispose nuclear waste.

In fact, hydrocarbon led industries also produce radioactive material as waste product. This material from the oil and gas industry is called ‘technologically enhanced naturally occurring radioactive materials’ (Tenorm). The largest Tenorm source is coal ash of which around 280 million tonnes is produced every year globally. It contains uranium-238 and thorium-232.

Stringent guidelines to dispose radioactive waste are followed by the industry players.

Radioactive waste is classified as low-level (LLW), intermediate-level (ILW), or high-level (HLW) based on its level of radioactivity. Radioactive elements with longer half-life (time taken for half its atoms to decay and become non-radioactive) are easier to handle and emit Alpha and Beta rays. Those with short half-life emit Gamma rays which are more penetrative and need to be handled carefully. Half-life may vary from a few hours to thousands of years for different materials.

Before disposal, processes of segregation, characterisation, handling, treatment, conditioning and monitoring are done to ensure proper disposal. The methods preferred for Radioactive waste disposable in India are as follows.

While their safety has been well established for decades and countries like France have used it for generating a substantial portion of their overall power generation, there are reservations about their safety. A number of research projects are underway to improve this technology further. Small modular reactors are being developed to take care of the safety as well as resource aspect of Nuclear energy. Newer processes of manufacturing, better, safer and more efficient fuel types are also being developed.

Used nuclear fuel can also be used as resource for other purposes. Once uranium or thorium is used as fuel in a reactor, it can be treated and used in another reactor as fuel. Processes like Closed Fuel Cycle and Breeder Fuel Cycle allow for recycling of nuclear fuel.

Many isotopes are used for preparing radio-pharmaceuticals for diagnostic and therapeutic usage. Some like Cs -137 are used for irradiation of food, sewage sludge, blood etc as a better option to Co-60. Some by-products like Sr-90 and Ru-106 are also used in cancer treatment.

Uranium is a relatively common element found in Earth’s crust. it is a part of most rocks and found abundantly in the sea as well. It is expected that 4.5 billion tons of Uranium can be extracted from sea water at 10 times the current price of Uranium.

Thorium can also be used as nuclear fuel. It is available in much larger quantities than Uranium (around 3 times more).

Very small quantities of fissile material are needed to produce energy. One Uranium fuel pellet produces energy equivalent to one ton of coal.

While there are still concerns about cost of setting up a plant, technological challenges, cost of operating and maintenance and safety, the future seems bright for Nuclear Power. With research ranging from developing smaller, safer and more efficient reactors like the Small Modular Reactors (SMEs), to developing better fuel and manufacturing processes, it will not be long before Nuclear power becomes the first option for clean renewable energy worldwide.

To Order your copy from Amazon click link: https://cutt.ly/vQeLXAu