In the previous issue we learnt about Stem cell applications in Nervous system disorders such as Parkinson’s disease, Alzheimer’s disease, Amyotrophic lateral sclerosis, Spinal cord injuries and Multiple sclerosis. In this part we explore more uses that are being explored through stem cells.

2.3 Diseases of bone and cartilage

Stem cells, once appropriately differentiated, could correct many diseases and degenerative conditions in which bone or cartilage cells are deficient in numbers or defective in function. This holds promise for treatment of genetic disorders such as osteogenesis imperfect and chondrodysplasias. Similarly, cells could be cultivated and introduced into damaged areas of joint cartilage in cases of osteoarthritis or into large gaps in bone from fractures or surgery.

At the present time, bone marrow stem cells, representing a more committed stem cell, are used to rescue patients following high dose chemotherapy. Unfortunately, these recovered cells are limited in their capacity to restore immune function completely in this setting. It is hoped that injections of properly-differentiated stem cells would return the complete repertoire of immune response to patients undergoing bone marrow transplantation. Complete and functional restoration will be required if, for example, immune/vaccine anticancer therapy is to work. More importantly, success would permit use of very toxic (and effective) chemotherapeutic regimens that could not currently be utilized for lack of an ability to restore marrow and immune function.

The most well established and widely used stem cell treatment is the transplantation of blood stem cells to treat diseases and conditions of the blood and immune system, or to restore the blood system after treatments for specific cancers. Blood diseases are typically caused by congenital or inborn deficiencies (e.g. sickle cell anemia), immune deficiencies (SCID), autoimmune mechanisms (immune thrombocytopenia purpura), and cancer (leukemia, myeloma, lymphoma). Standard treatments include blood transfusions, drugs to stimulate blood cell production, and hematopoietic stem cell transplantation to supply new healthy cells. Hematopoietic stem cells make either myeloid cells (red blood cells carry oxygen to the tissues) or lymphoid cells (B and T cells that fight specific infections in the body). The hematopoietic stem cell transplants from bone marrow, umbilical cord and peripheral blood are approved by health Canada and the FDA to help treat a variety of different blood-based cancers including multiple myeloma, leukemia and lymphoma, and the other blood disorders, including anemia, thalassemia and severe combined immune deficiency or SCID.

Hematopoietic stem cell transplantation is an aggressive form of therapy and although it can be used to successfully treat many blood disorders, including thalassemia, SCID, multiple myeloma, leukemia and lymphoma, more than 50% of patients are still not cured of their diseases. 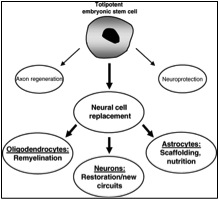 Human stem cells could also be used to test new drugs. For example, new medications could be tested for safety on differentiated cells generated from human pluripotent cell lines. Other kinds of cell lines are already used in this way. Cancer cell lines, for example, are used to screen potential anti-tumor drugs. But, the availability of pluripotent stem cells would allow drug testing in a wider range of cell types. However, to screen drugs effectively, the conditions must be identical when comparing different drugs. Therefore, scientists will have to be able to precisely control the differentiation of stem cells into the specific cell type on which drugs will be tested. Current knowledge of the signals controlling differentiation fall well short of being able to mimic these conditions precisely to consistently have identical differentiated cells for each drug being tested.

Much is left to be discovered and understood in all aspects of human biology. There are some of the larger problems in basic and clinical biology where the use of stem cells might be the key to understanding.

A new window on human developmental biology: The study of human developmental biology is particularly constrained by practical and ethical limitations. Human ES cells may allow scientists to investigate how early human cells become committed to the major lineages of the body; how lineages lay down the rudiments of the body’s tissue and organs; and how cells within these rudiments differentiate to form the myriad functional ell types which underlie normal function in adult. The knowledge gained will impact many fields. Cancer biology will reap an especially large reward because it is now understood that many cancers arise by perturbations of normal developmental processes.

Models of human disease that are constrained by current animal and cell culture models:

A large number of pathogenic viruses including human immunodeficiency virus and hepatitis C virus grow only in human or chimpanzee cells. ES cells might provide cell and tissue types that will greatly accelerate investigation into these and other viral diseases. Investigation of a number of human diseases is severely constrained by a lack of in vitro models. Current animal models of neurodegenerative diseases such as Alzheimer’s disease give only a very partial representation of the diseases’ process.

Pluripotent stem cells could be used to create an unlimited supply of cells, tissues, or eve organs that could be used to restore function without the requirement for toxic immunosuppression and without regard to tissue matching compatibility. Such cells, when used in transplantation therapies, would in effect be suitable for “universal” donation. Bone marrow transplantation could become safe, cost effective and be available for treating a wide range of clinical disorders, including aplastic anemia and certain inherited blood disorders.

In gene therapy, genetic material that provides a missing or necessary protein, or causes a clinically relevant biochemical process, is introduced into an organ for a therapeutic effect. For gene-based therapies (specifically those using the DNA sequencing), it is critical that the desired gene be introduced into organ stem cells in order to achieve long term expression and therapeutic effect. Besides delivery problems, loss of expression or insufficient expression is an important limiting factor in successful application of gene therapy and could be overcome by transferring genes into stem cells (which presumably will then differentiate and target correctly).

Current research includes application of different stem cells from their different sources of the body as described below:

In the past many years, transplants of hematopoietic stem cells from bone marrow have been widely used of all stem cell therapies. Transplants can be autologous (from the patient) or allogeneic (from a donor). Autologous transplants circumvent the problem of graft rejection but, for reasons that may include age, poor health or bone marrow disorders, not all patients are candidates. The biggest stumbling blocks to the more widespread use of allogeneic transplants are the availability of suitable donors and the need to match a donor graft as precisely as possible to the recipient.

As home to a variety of stem cells, umbilical cord blood has tremendous potential as a cell therapy and is now routinely used as an alternative to bone marrow transplantation. The first cord blood transplant occurred between a brother and sister in 1988 to treat Fanconi’s anemia, a genetic condition that tends to lead to myeloid leukemia and bone marrow failure. This transplant was matched but subsequent efforts showed that it was also possible to transplant mismatched cord blood, with less graft versus host disease and the same survival benefit as mismatched bone marrow transplants.

In 2006, Dr.shinya yamanaka showed he could turn back the clock on adult skin cells and reprogram them to a younger, embryonic-like state. The cells are called pluripotent because they are no longer locked into making one cell type but instead can produce a variety of different cells. Since the technology was first developed, scientists now have methods in place for turning induced pluripotent stem cells or iPS cells from skin into a variety of variety of specialized cells, including blood. Scientists can also use iPS cells in the lab to create diseased cells and these are excellent tools for understanding blood diseases and screening candidate drugs. The combination of gene therapy and iPS technology is also very promising, and it was with great excitement that scientists found that genetically corrected skin cells from patients with Fanconi’s anemia could be reprogrammed into patient-specific iPS cells that could go on to make healthy red and white blood cells in the laboratory. They were also able to successfully correct a genetic blood deficiency in mice using the iPS/gene therapy combination.

Stem cells whether cord blood, adult or embryonic, have numerous applications in the areas of scientific research and clinical therapy. For researchers, stem cells are the key to understanding how humans develop the way they do. Hopefully, the study of stem cells will unravel the mystery of how an undifferentiated cell is able to differentiate and will also determine what is the signal that triggers the sequence. The greater the understanding and possibly even control, of cell division and differentiation is a significant strategy in the battle against dreaded illnesses such as cancer, which is basically the continuous multiplication of abnormal cells. The use of stem cells for the testing of new medicines is another highly-anticipated application. Although, certain cells are already utilized for this purpose-cancer cells, for example, are used to tests anti-tumor drugs testing on pluripotent cells would open up this field to a much broader number of cell types. The third and possibly the most important application, is cell therapy, which is the use of stem cells to produce the cells and tissues required for the renewal or repair of the body organs that have been damaged by debilitating and mortal diseases such as cancer, spinal cord injuries, glaucoma, Parkinson’s.